In this article, New Chapter herbalist Chris Webb explores the long history of our beloved ingredient, Black Elderberry. Did you know Elderberry has been used by humans for millennia, and is still going strong today? This combo of traditional use plus modern scientific support is our inspiration for formulating with Elderberry today. Discover New Chapter's sustainably sourced, pure, potent, 64x concentrated extract in Elderberry Force™, Elderberry Syrup + Honey, and Organic Elderberry Gummies.

In this year of focus on the Immune System, elderberry has been a popular topic in the news. Science has confirmed a role for elderberry in human health in cellular lab studies and in some human clinical trials. Since 2012, 50-80 studies have been published annually on PubMed, the scientific journal repository organized by the National Institutes of Health, showing how this fruit mechanistically influences the immune system. Internet searches will take you to the latest information on elderberry and human immunity, as well. 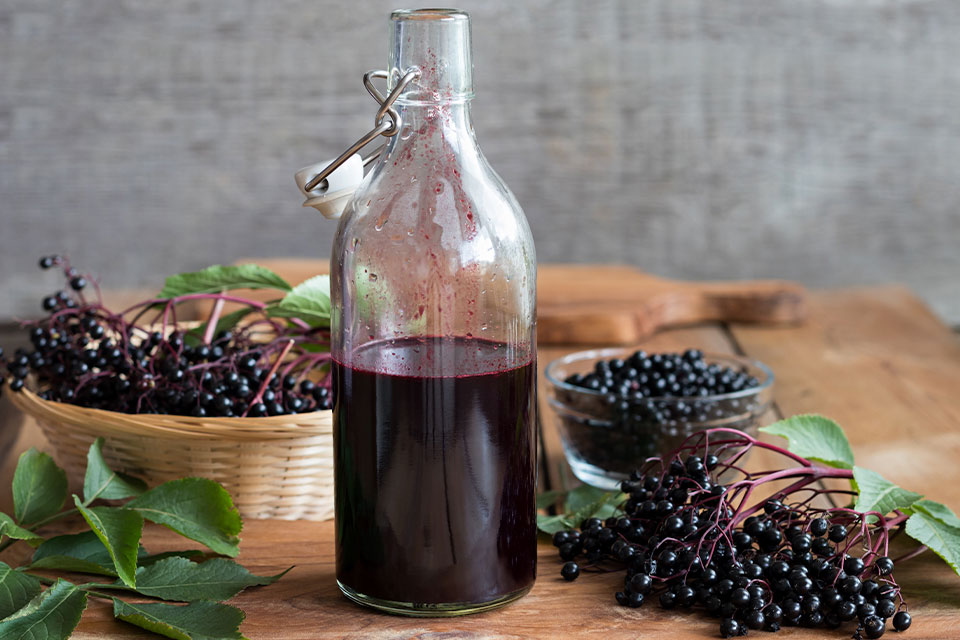 The human uses of elderberry didn’t just land in the mind of a scientist a generation ago. No one just looked at the elderberry and said, “Let’s see how this works on the immune system.” Rather, centuries of folk practices and rudimentary scientific inquiry, the cutting edge at the time, instruct what we see today as a boom in research.

For an herbalist who loves to steep in the historical literature, tracing the story of an herb is one of the most fun parts of the job. Ancient Greeks used elderberry as part of their pharmacy at the beginning of the Common Era (formerly AD). Charlemagne decreed elder to be planted throughout his realm in the 700s C.E. as a readily available “medicine cabinet.” Folk traditions linked the elder tree to Judas and Jesus’s cross. The elder could not be used for firewood, because the sacred reverence that developed around the plant forbade harming the tree.

In pagan Europe, the elder was viewed as magical. A nymph named Hylde-Moer (Elder Mother) was said to dwell within the tree as a caretaker. If the elder were disturbed or the wood taken for furniture, the folklore of the time said that the nymph would follow the wood into the home and torment the owners. This myth engendered the practice of requesting Hylde-Moer’s permission prior to disturbing the tree of its fruit, flower, or wood.

The request to the Elder Mother would go like this, according to 18th-century writer Trogillus Arnkiel: “Lady Ellhorn, give me some of thy wood, and I will give thee some of mine when it grows in the forest.” The request was to be made with humility: a bended knee, hatless head, and folded arms. If Hylde-Moer remained silent, the request was considered granted. Medieval peasants and native North Americans were known to leave offerings of gifts for the plant when picking part of it for their own use. 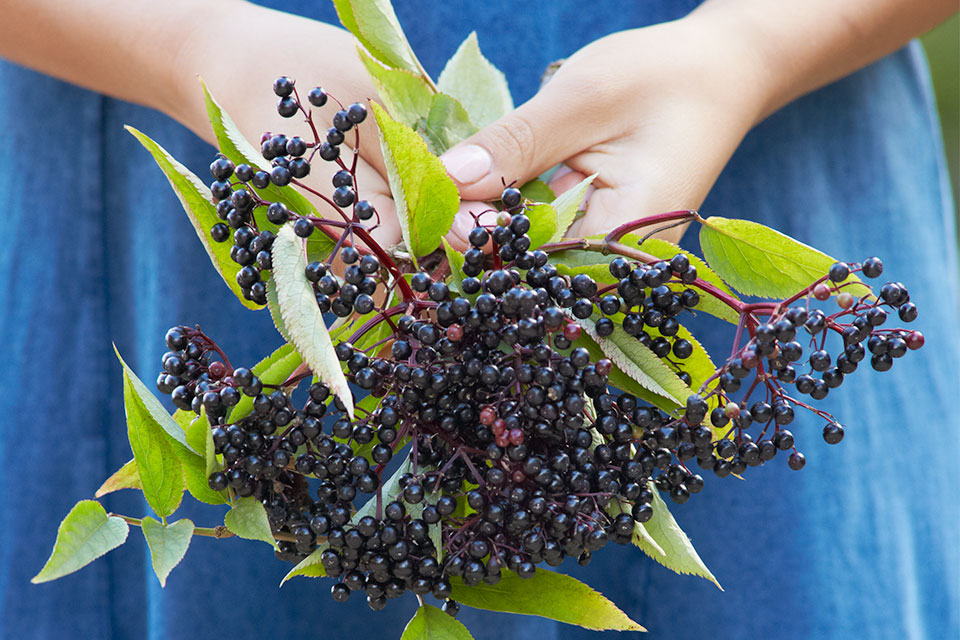 Elderberry Uses into the 18th Century

Oral traditions in the Middle Ages gave way to the dawn of the printing press, exploding the amount and reach of the latest information on herbal usage. The elder even showed up in plays and poems by William Shakespeare and William Langland. Among the earliest full compendia of herbal knowledge was the 1400-page tome, The Herball: or Generall Historie of Plants (1597) by John Gerarde. In this book were details on each plant’s anatomy and habitat, how to grow it, and how each plant part is employed for human health and other uses. In this herbal, meticulous drawings accompanied the articles. Shortly after, Anatomia Sambuci, an elderberry-specific herbal book by physician Martin Blochwich was produced after his death in the early 1600s. Originally published in Latin, it went on to fame in German and English before the 17th century had ended.

These early texts concentrated on symptomatic uses, rather than the systematic and microscopic support that is the focus of modern science. Using elder as a food was one way to ensure compliance. For example it was thought that mixing the elder flower with meat or eggs would calm “the belly” after the heavy meal, that the dried seed from the berry would be seen as “good for such as have the dropsie,” and flower or berry wine was “often recommended for excellently removing the displeasing overflow” of catarrhs. Catarrh is an antiquated word describing mucus buildup in the nose and throat.

In the mid-18th century, John Hill produced an early account that would presage elderberry’s modern focus: “[T]he juice of the berries, boiled down with a little sugar, or by some wholly without; and this, when it comes to the consistence of honey, is the famous rob of elder, good in colds and sore throats.” One hundred years later, physiomedicalist William Cook noted that the berries used in wine could be “secernent,” which means promoting secretion.

Contemporary herbal historian Matthew Wood notes that American elder was used interchangeably with European black elder in U.S. practices at the start of the 1900’s. The Elder flowers and berries were the parts most typically used. In fact, the Eclectic physicians, who dominated natural medicine at the turn of the 20th century, were prone to use the flowers for the attributes Blochwich gave to the berries, noting their use in catarrh and dropsy.

In the first quarter of the 20th century, herbalism was sequestered away from what was considered proper medical care. And the whole herb was given secondary status to the isolated constituent, as targeted medicines derived from the microscopic attributes of the plant began to take hold. However, as the 2000s began, plant use for wellness is on the rise again, yielding the explosion of research we see today. Use of elderberry for immune support is now a hot topic, and for good reason.

Whether you’re harvesting your own berries, taking Elderberry Force™ capsules, or indulging in a delicious elderberry syrup, you are engaged in a centuries-old tradition—using plants to enhance your well-being. New Chapter’s formulation principles demand that we look to science and tradition when shaping our offerings, because wisdom lies within both modalities. In the case of elderberry, the winding road of two millennia demonstrates that science backs up what the ancients once did.