From fragrant apple pie to spiced lamb shanks, from holiday lattes to crunchy granola, Cinnamon brings a special flavor to our lives. Cinnamon trade routes have existed for centuries, and it was used in ancient Egypt and Rome. At one time, Cinnamon was even more valuable than gold!

The aromatic brown spice we know as Cinnamon comes from a type of laurel tree ( Lauraceae). Powdered Cinnamon or Cinnamon sticks (“quills”) are derived from the dried bark of this tree. The name Cinnamon comes from the Greek work kinnamomon, which may be related to the Indonesian or Malay words kayu manis, which means “sweet wood.” Cinnamon has a warm, spicy flavor. Even just 1 gram of Cinnamon powder can really pack a punch.

If you’re looking into Cinnamon as an ingredient, you’ll notice there are several versions of the Cinnamomum genus. 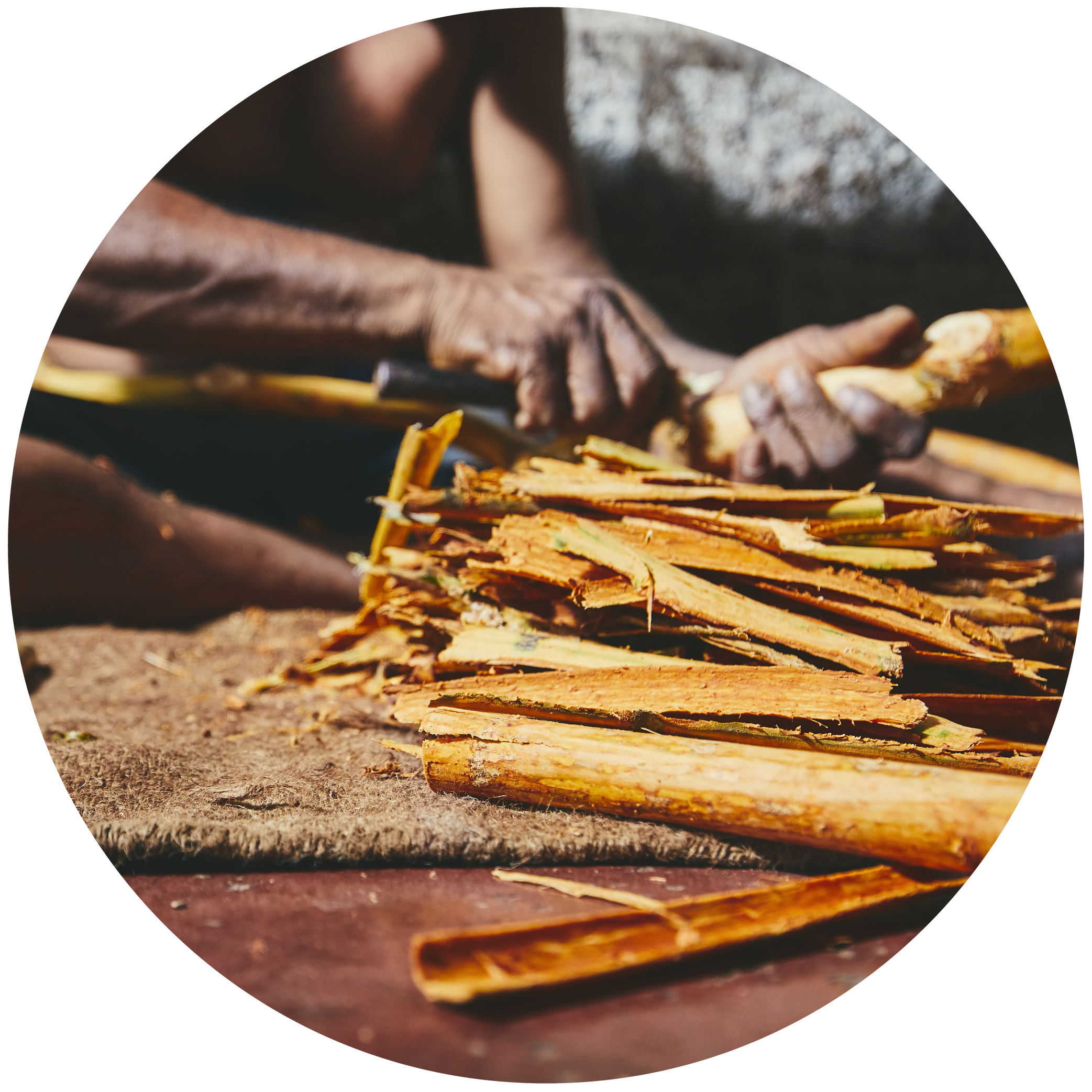 Cinnamomum zeylanicum(also known as Cinnamomum verum) is indigenous to Sri Lanka and India and is now cultivated in tropical regions around the world. The name “verum” means “true”—which makes sense because Sri Lanka is considered the true, original home of this unique spice. Some find this type of Cinnamon to be more fragrant, and it also tends to be more expensive. 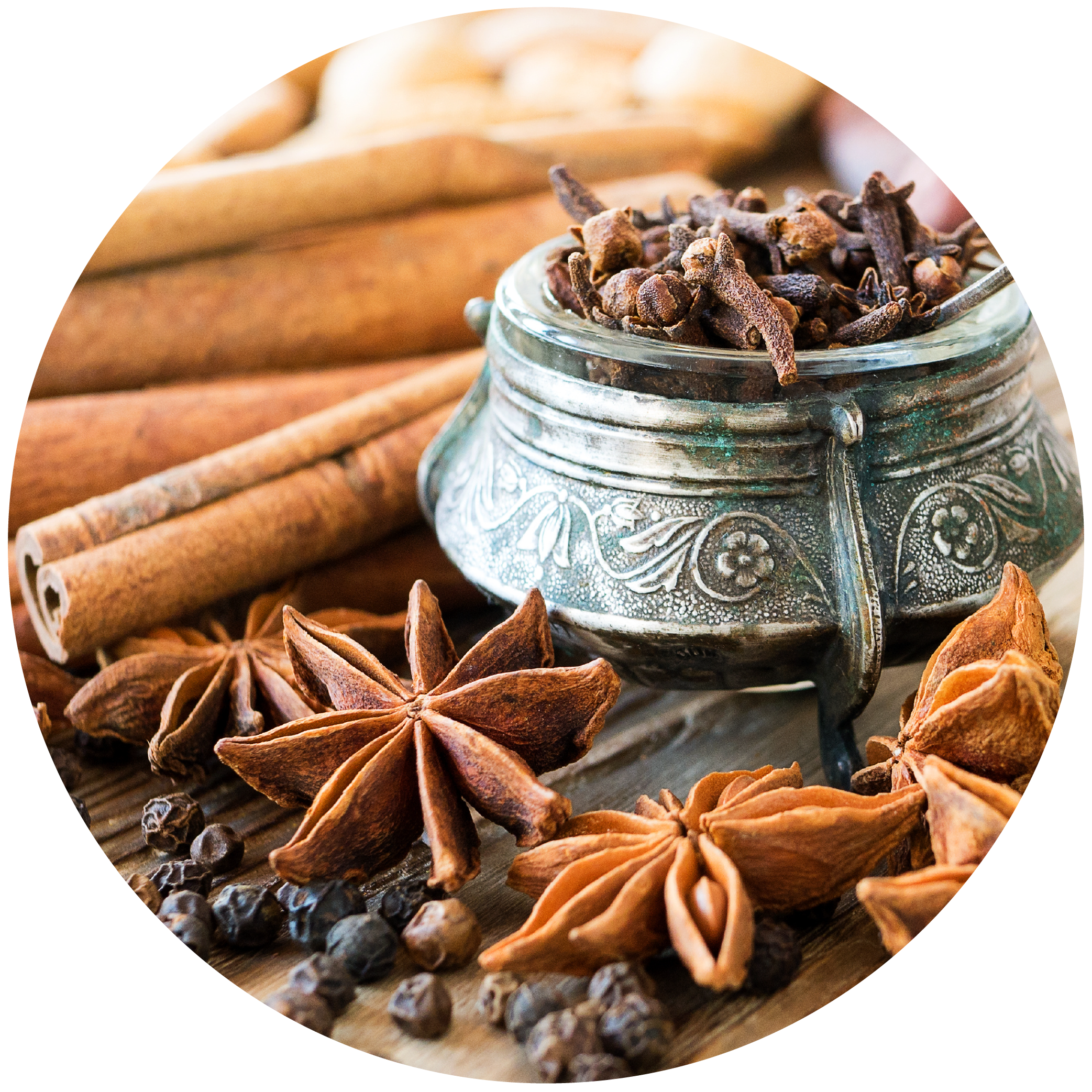 Cinnamomum cassia (also known as Cinnamomum aromaticum) is a type of Cinnamon originally from southern China. The name “cassia” means “from China.” This Cinnamon has also been popular in trade, ceremony, and flavoring for thousands of years.

What are Cinnamon Supplements?

People who understand and seek Cinnamon’s benefits may turn to supplements for their potency and sheer convenience. Pure Cinnamon supplements typically deliver the herb in capsule form. Keep in mind that supplements are not just the powdered kitchen spice put into a pill! Supplemental Cinnamon is typically concentrated to deliver a specific dose of the herb’s essential oils and other plant compounds. Cinnamon’s unique compounds include cinnamaldehyde, cinnamate, and cinnamic acid. Cinnamaldehyde is the compound that gives Cinnamon its sharp bite.

Cinnamon supplement benefits tend to fall in two main categories. It’s been studied both for cardiovascular health benefits and for its antioxidant action, which benefits cells.

Cinnamon has been studied for its ability to benefit a very particular area of cardiovascular health, which is healthy blood sugar support. Cinnamon is linked to helping the body retain healthy blood sugar levels and helping to maintain normal blood glucose following a meal.*

Cinnamon has strong antioxidant action in the body and helps neutralize free radicals. This in turn helps protect the body’s cells from damage and oxidative stress.* In fact, a study of 26 common spice extracts found Cinnamon had one of the highest antioxidant capacities and highest phenolic content. (Phenolic compounds are responsible for antioxidant activity.) 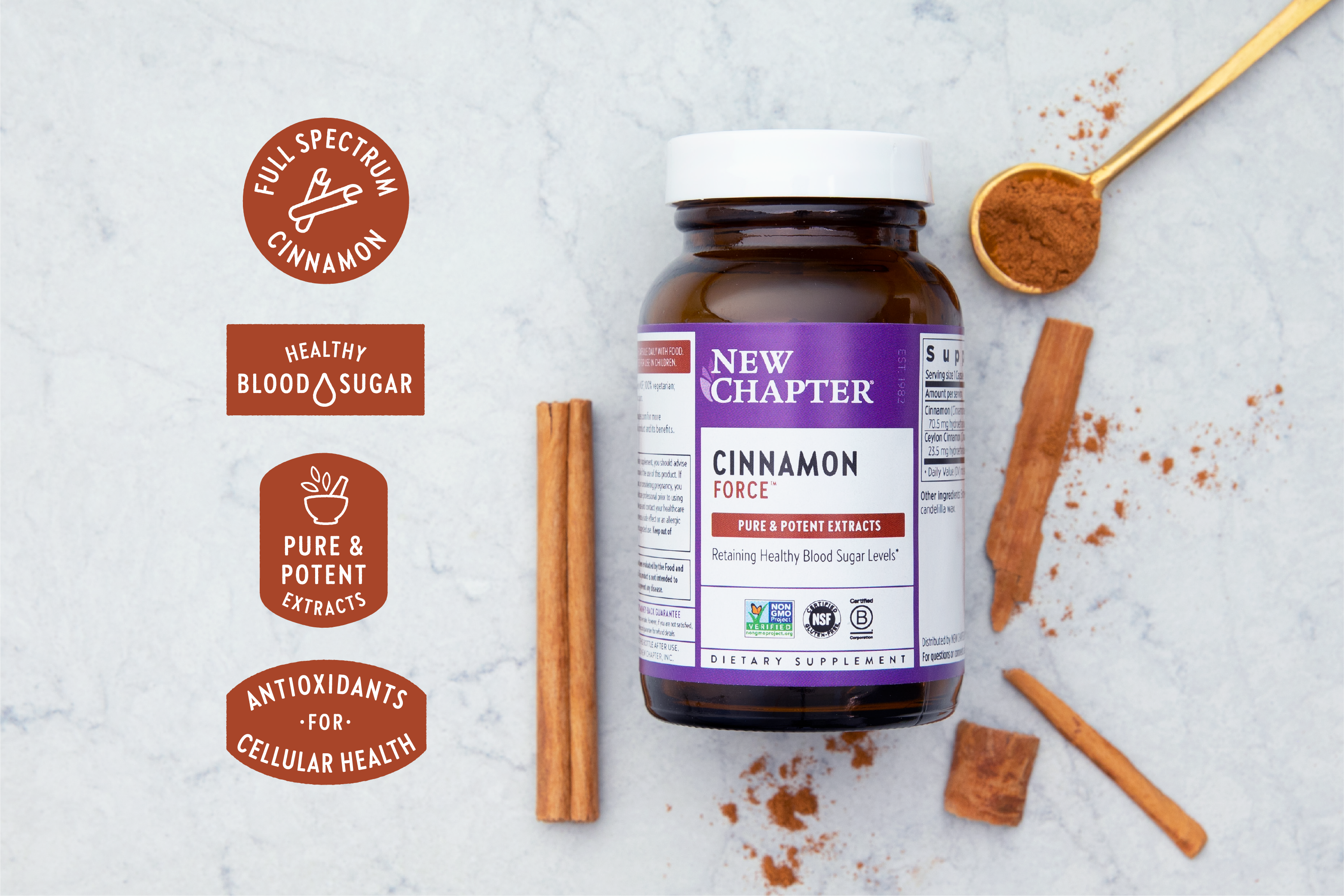 What to Look for In Cinnamon Supplements

While some companies may just use a single type of extract in their Cinnamon supplements, New Chapter ® is different. Our potent Cinnamon Force™ is expertly formulated to deliver a real symphony of potent compounds from whole Cinnamon. Using only supercritical or traditional techniques of extraction, our potent formula delivers multiple beneficial phytonutrients. Supercritical extraction is an innovative process that uses natural carbon dioxide to gently extract delicate plant compounds, including beneficial oils. The method can also highly concentrate phytonutrients. With Cinnamon Force, you get the equivalent of 1,740 mg of whole Cinnamon concentrated into just 140 mg of extract per capsule.


What’s more, Cinnamon Force is designed with two types of Cinnamon, delivering both Cinnamomum zeylanicum and Cinnamomum cassia. This helps ensure you get the whole, broad profile of plant nutrients that make Cinnamon so remarkable. 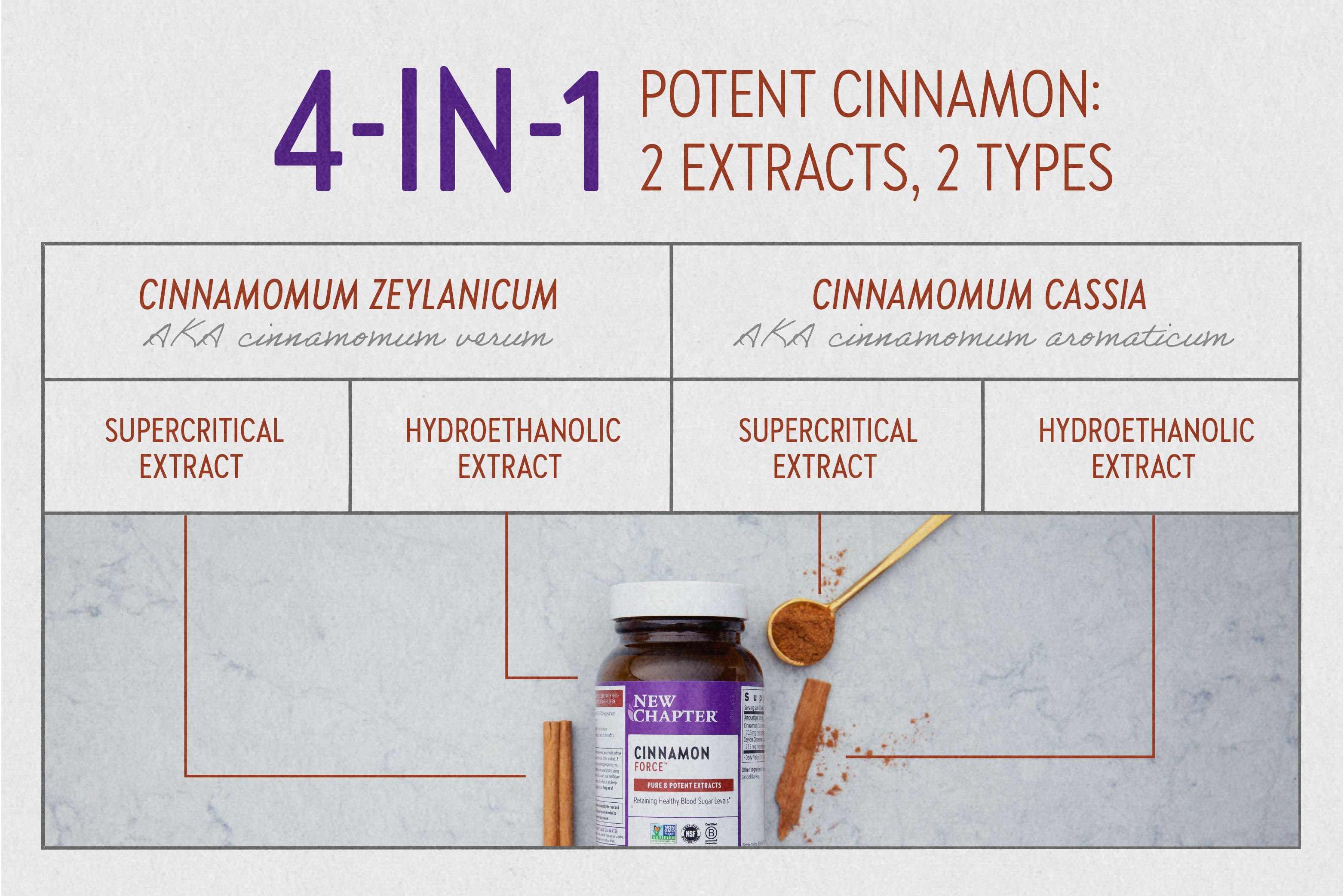 Cinnamon is the Spice of Life!

New Chapter travels the globe to find the perfect Cinnamon for our pure extracts—and that includes going to the island of Sri Lanka for authentic Cinnamomum zeylanicum. We select only excellent quality whole Cinnamon bark for our extracts, and we have it third-party tested for purity, identity, and safety. In this way, we are Delivering the Wisdom of Nature by preserving Cinnamon’s innate nuances, many of which may be lost or discarded if herbs are fractionated or altered. Our industry-leading quality process ensures you get exactly what is listed on our bottles. Cinnamon Force is non-GMO Project verified, 100% vegetarian, and certified gluten-free by NSF. Now that’s wellness, well done! 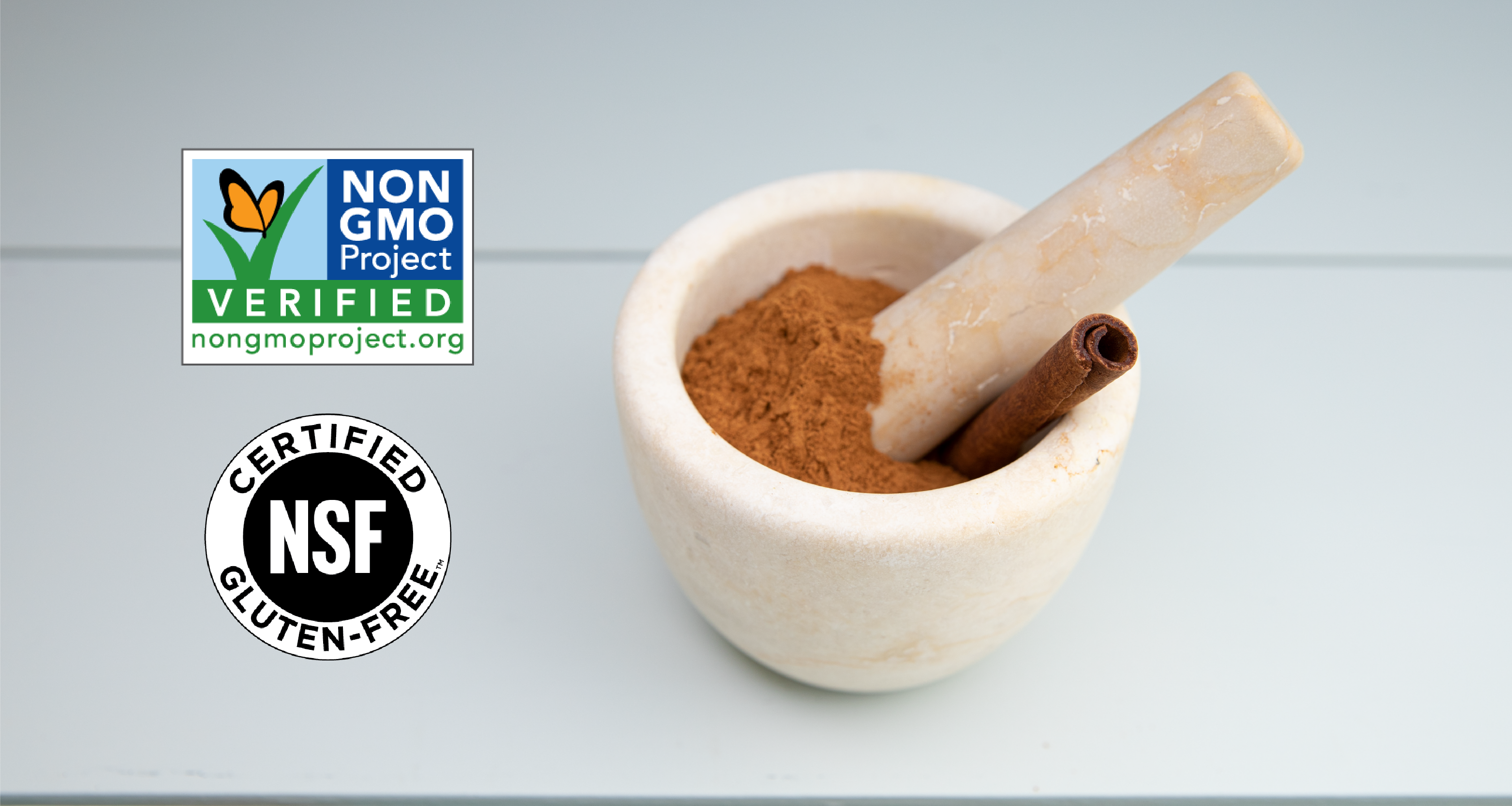