Since ancient times, humans have benefited from the unique qualities of whole, nourishing mushrooms. Mushrooms seem to grow like plants, but they have cells similar to animals. In fact, mushrooms are neither plants nor animals, but belong to their very own kingdom—the Fungi Kingdom. Some people find fungi to be mysterious or overwhelming. There are certainly MANY varieties of fungi in the world, and they live just about everywhere. Today, let’s dig into some remarkable health benefits of mushrooms, the jewels of the fungi world.

This is the spreading, thread-like structure of the fungi. In Nature, mycelium is often underground and unseen. There are millions of kinds of mycelia in the world. It typically grows in some kind of biomass such as soil, wood, or brown rice (in commercial cultivation).

This is the fruiting body and the most visible and well-known part of the fungi. Usually bell-shaped, mushrooms grow up and out of the mycelium. There are thousands of types of mushrooms.

These are microscopic reproductive cells emitted by the mushroom or fungi.

These are metabolites created and secreted by the mycelium.

Mushrooms and mycelia produce compounds found nowhere else on earth. Mushrooms must adapt to their surroundings, and in doing so they produce a large array of protective compounds. Over thousands of years, people have discovered how consuming mushrooms can support health, thanks in part to their diverse chemistries. For example, mushrooms are known to be natural sources of beta glucans , which are potent immune-boosting compounds.

History of Mushrooms as Medicine

There is archaeological evidence that humans have known the benefits of eating mushrooms for many millennia. Shelf mushrooms growing on trees in the mountain forests of Russia and Scandinavia have been used as folk remedies. Practitioners in China and Japan have relied on medicinal mushrooms throughout written history. The Mayan and Olmec cultures of the ancient Americas used mushrooms in consciousness-expanding rituals. Researchers are also documenting the long traditional and medicinal use of mushrooms in West African countries. 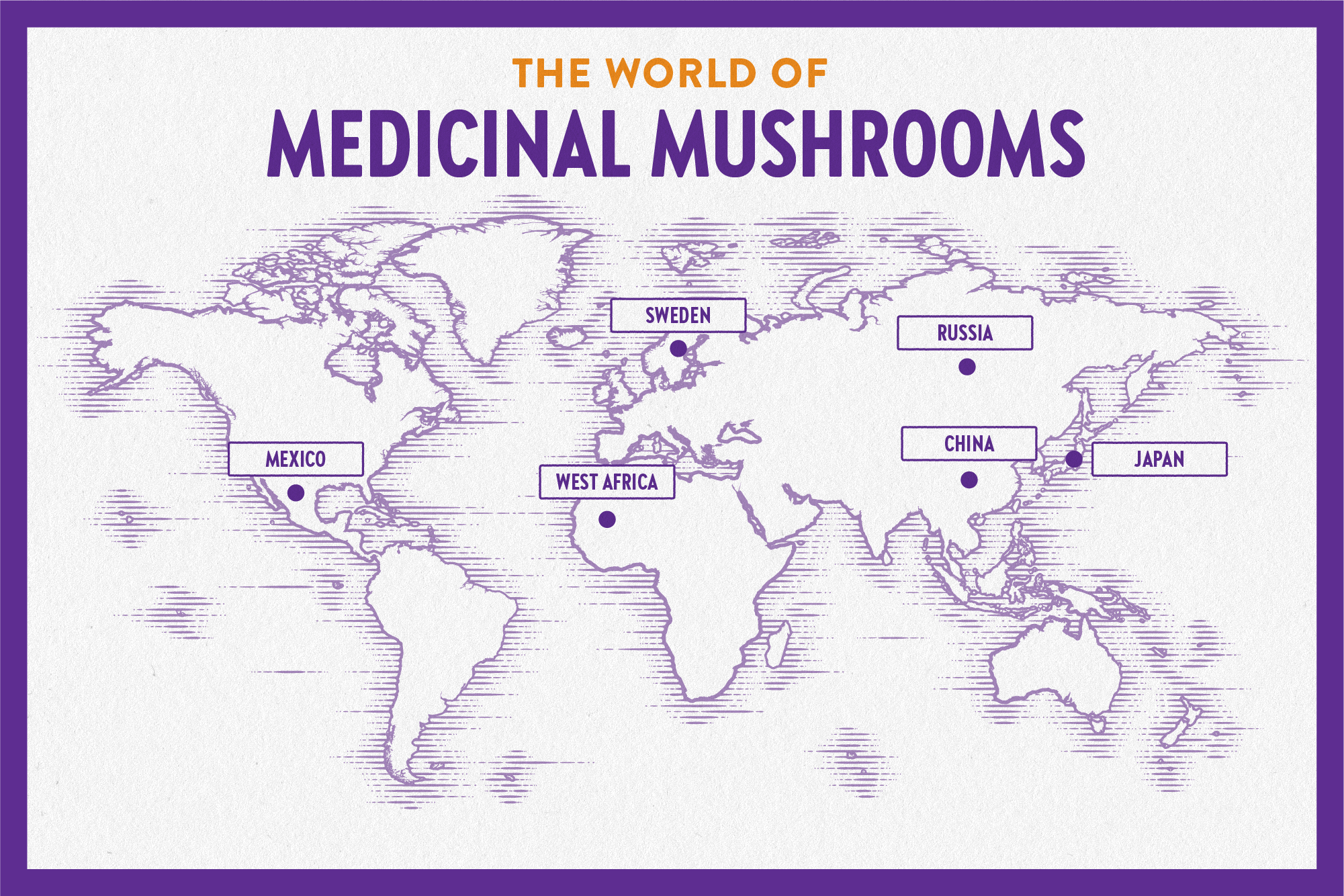 Some common health benefits of mushrooms include supporting a healthy immune response, supporting healthy aging, and enhancing mental clarity.* One popular medicinal and traditional mushroom, Reishi, has even been called the “Mushroom of Immortality.”

As a food, mushrooms are beloved sources of umami, the prized and pungent “fifth taste.” Popular culinary mushrooms include button mushrooms, portobellos, enoki mushrooms, and oyster mushrooms. There are also mushrooms that have long histories of therapeutic use. All told, there are about 20-30 edible species of mushroom that are commercially cultivated, and more are wild collectables.

Mushrooms are notoriously tricky to identify. For every remarkable species with distinct benefits, there may be a look-alike that’s fundamentally different at a genetic level. So, for as long as humans have been benefiting from medicinal mushrooms, we’ve relied on experts to verify their correct identity. Think of the wisewoman, centuries ago, carefully wild-crafting mushrooms in the Siberian forest to supply her village. Today, we count on mycologists—mushroom specialists—to steadily increase our body of knowledge on the characteristics and compounds that distinguish each mushroom species.

To be absolutely confident that we are delivering the mushrooms you seek, New Chapter uses state-of-the-science technologies to match, verify, and guarantee each and every strain in our mushroom supplements. This includes identification through mushroom DNA testing: we take the time to test each strain at the DNA level, then cross-check and confirm the results with robust databases. Every batch is tested against an established chemical fingerprint for that mushroom species to verify and confirm its identity. We’re proud to use the latest advanced technologies to verify and guarantee that you’re getting the exact mushroom you paid for.

Reishi is considered an adaptogenic mushroom. An adaptogen is an herb or fungi that helps your systems adapt to the effects of stress.

Nootropics contain compounds that enhance brain function and focus. Lion's Mane mushroom is a nootropic that is increasingly popular for its brain benefits.

These 7 popular medicinal mushrooms are widely used by people seeking natural wellness and are all available as dietary supplements.

Reishi (Ganoderma lucidum, Ling zhi) is one of the most revered tonic mushrooms. In the classic Chinese herbal compendium called Shennong Ben Cao Jing, Ganoderma fits into the “superior” category . This ancient classification was given to herbs that are effective in maintaining overall balance in the body and that can be taken long-term. This meshes well with modern Reishi mushroom benefits such as being an adaptogen—known to optimize your systems to deal quickly and easily with the effects of occasional stress. Reishi mushroom supplements’ benefits include helping to maintain vitality, healthy aging, and longevity, and also support from occasional stress.*

Reishi identification shows the importance of precision. While Reishi is usually called Ganoderma lucidum, there are different varieties referred to by that name. The authentic Ling zhi strain is a mainstay in the Chinese herbal tradition: consumed by emperors and long respected for its many benefits. Recently, mycologists DNA-matched Ling zhi with a specific Chinese variety of Ganoderma lucidum. New Chapter tested samples of products labeled G. lucidum and found that some do deliver the renowned Chinese variety—including our own Reishi. But others are formulated with less studied Ganoderma forms, such as a North American or European type. New Chapter seeks to deliver true Ling zhi, with its studied benefits and a long history of use… so that’s what you’ll find in our mushroom products. 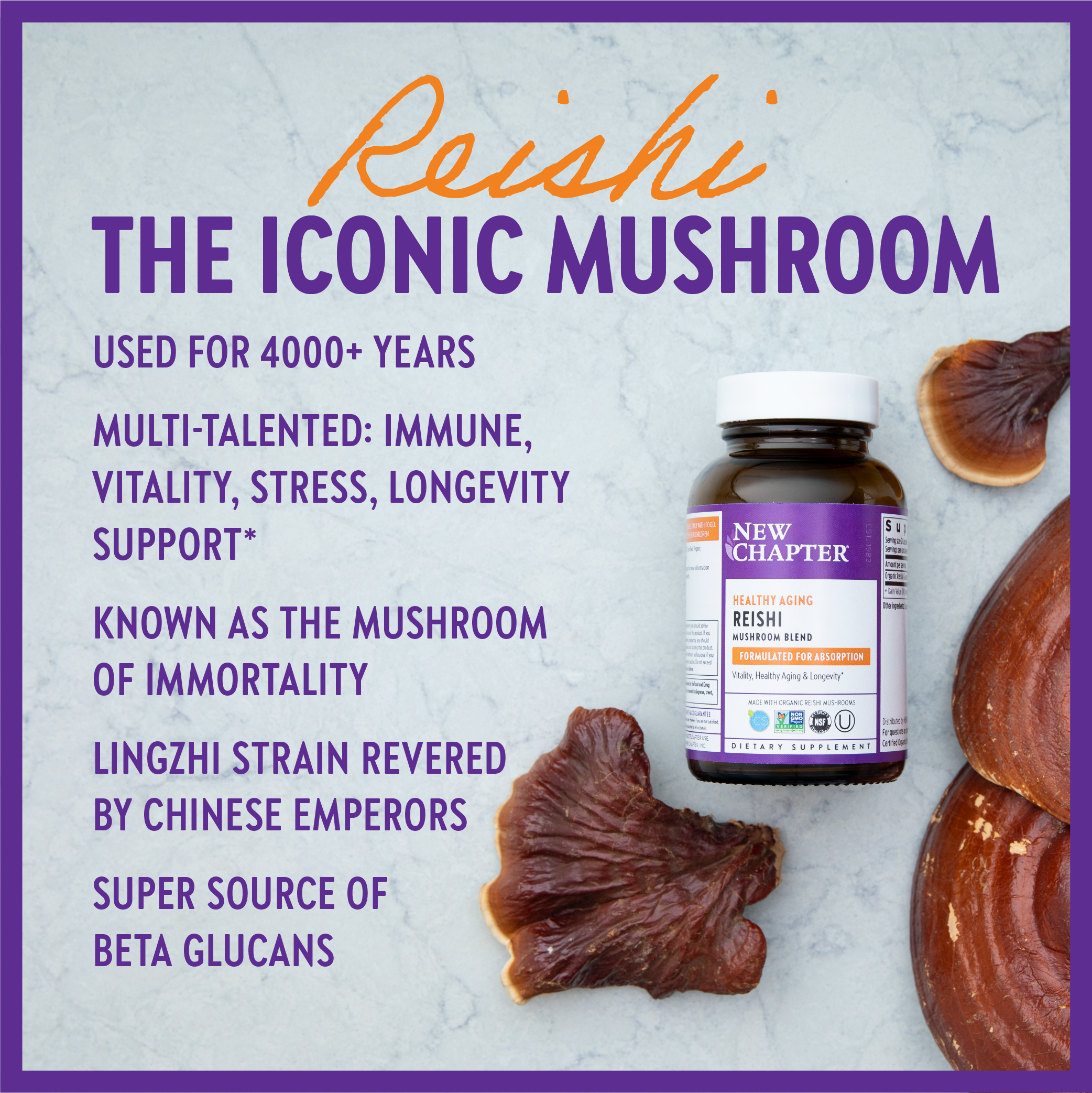 Sometimes called "Monkey's Head" or Yamabushitake, Lion's Mane (Hericium erinaceus) is a type of "teethed fungi" with a distinctive pale, icicle-like appearance. Studies show Lion’s Mane compounds may support nerve growth factor synthesis. It can be classified as a nootropic because Lion’s Mane mushroom benefits include helping to promote mental clarity and normal brain function.* Lion’s Mane blends are a favorite of people looking for support with studying or at work.

There are a few other select fungi species that are both revered traditionally and researched extensively for fantastic mushroom benefits.

New Chapter mushroom blends are carefully formulated for proper absorption. That means we steam mushrooms gently to crack the cell walls and release potent polysaccharides for your optimal absorption. (Polysaccharides are considered the main type of compounds that enable health benefits from mushrooms , and they include nourishing beta glucans.) It’s not enough to just eat a mushroom—your body also needs to be able to use the active constituents!

If the benefits of mushrooms sound awesome, we invite you to experience life-cycle activated, 100% USA-grown mushrooms from New Chapter. New Chapter® believes it is essential to preserve the whole mushroom and its complete life cycle whenever possible. Each stage of a mushroom's life cycle adds critical nutrients and protection for the mushroom. Our mushroom strains are allowed to grow for up to 90 days to deliver their full spectrum of remarkable compounds. The combination of life stages—mycelium, fruiting bodies, spores, and extracellular compounds—works together to protect your health and wellness.* Our DNA-tested strains combine species revered traditionally and qualified through the latest gold-standard technologies, to bring you nourishing supplements you can trust. 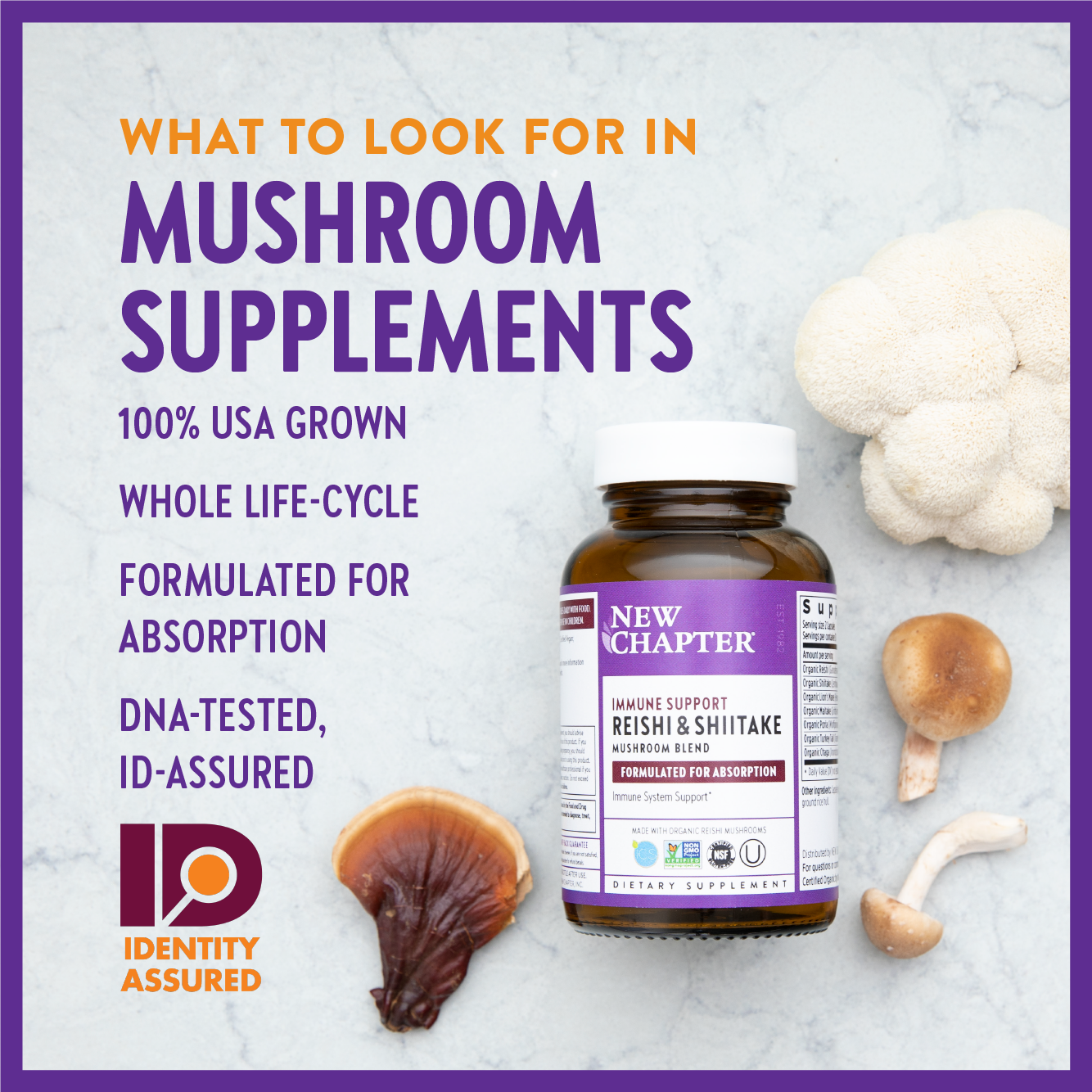